After the official dates of interzum @home, Kesseböhmer sees a positive outcome. The fittings specialist had transformed its half-timbered building in the company’s grounds in Dahlinghausen into a cosy virtual home in good time for the trade fair and invited its business partners from around the world along with their customers to discover their innovations. As a newcomer to organising a digital trade fair platform, the idea was to make visits as personal as possible. Managing Director, Burkhard Schreiber was pleased that Kesseböhmer@Home achieved this wholeheartedly.

Previously, the fittings specialist has used the half-timbered building as a prestigious bricks-and-mortar showroom, while in 2021 it has provided the setting for a virtual home in five languages for the first time. To achieve this, Kesseböhmer pulled out all the stops for a digital online presentation. In front of the building, Oliver Kesseböhmer welcomed guests with a personal address; inside the exhibition, Burkhard Schreiber outlined the new products, also pointing out the “tRACK” furniture system which lends structure to the rooms as an architectural design tool. Lively talks presented by company personalities, 33 touchpoints, 96 short videos, movable 3D CAD image data and a total of 12.3 GB of material conveyed an authentic impression of the company and its products and formed part of a realistic, informative and diverse trade fair experience.

The idea of taking navigation away from visitors and taking them on a personal guided tour of the stand and half-timbered building instead via a stable video chat tool was well received. About 200 business partners from 49 countries received training from Kesseböhmer beforehand and made use of this opportunity between 4 and 7 May 2021, also showing their customers the innovations during each guided tour. Over 2,000 contacts came via the “interzum @home” platform, although it will be hard to follow these up.

In the generous kitchen-diner on the ground floor of the half-timbered building, Kesseböhmer had devised two kitchen scenarios for the premium and entry level sectors. In the premium area, the slim, closed “Arena pure” trays, which are accentuated by a narrow groove all round, creamed off the highest rating of five stars.

Likewise, the idea of catering for all types of wall unit opening with one ultra-thin energy storage mechanism was well-received. The market launch of the “FREEslim”, which can be screwed on from the inside or fully integrated into the side panel of the carcase, is scheduled for 2023.

In the entry-level sector, Kesseböhmer supplied arguments in favour of its new “K-Line” range, which responds to the demand for quality and functionality in price-sensitive markets. Moreover, its unpretentious and flat design vocabulary flows into a comprehensive functional and modular range for the utility room.

Holzwerk Rockenhausen also created two new ranges of design-focused alternatives to the cutlery inserts which are often installed as standard. The sets comprising just a few components are a persuasive combination of materials featuring solid wood or the sustainable “OrganiQ” material with metal. As well as drawers and pull-outs, the company is also targeting the kitchen niche for the first time with organisation solutions made from solid wood.

“Conero” has been developed by Kesseböhmer as an extensive range of fittings for private dressing rooms. The concept is aimed at the greatest possible adaptability to any bespoke planning situation and the realisation of individual wishes. The fittings specialist designed the individual features of the fittings to be functional and user-friendly. The attractive inside pull-outs with narrow frames in the “Soft Edge” design are especially eye-catching and can be partitioned with finely coordinated drawer inserts.

In their own words, Kesseböhmer is also presenting a world first within their “Conero” range in the form of a wardrobe lift complete with shelf. The drop-down and conveniently accessible storage space above the clothes is considered a unique selling point.

Kesseböhmer complemented its trade fair appearance with a presentation of its updated eService programme complete with CAD portal, eLearning platform and marketing support. The aim is to make products easily accessible to customers and sales partners – from getting acquainted with them to design and installation. The new “K2X” processing philosophy was especially well received by fitters without a CAD/CAM workflow. It provides innovative tools for easily incorporating products from the core range into furniture or interior design.

Moreover, Kesseböhmer has developed “K2Build”, a complete set that is a bit like a cake mix for an individual planning situation including the “YouK” ladder shelving unit. At the same time, “YouK” lays the foundations for introducing modern and functional industrial design into any living area.

Kesseböhmer wants to create an interface to kitchen buyers in the future via a digital solution that will determine their requirements in terms of kitchen design. The aim is also to use a marketing trick to cultivate relationships with end users. At the trade fair, Burkhard Schreiber announced their collaboration with Saliha Özcan alias Sally from “Sallys Welt” (Sally’s World) as a “new friend of the company”. As one of the most successful bloggers on the subjects of food and baking, the former primary school teacher reaches over 12 million people on various online channels every month.

Kesseböhmer presented the first video at the trade fair, in which Sally explains the installation and use of “SpaceFlexx”. The intention now is to generate content for the end-user focused media channels of both companies. The first projects should be up and running in June 2021; the collaboration is planned for an initial period of three years. Like other partners in the kitchen industry, Kesseböhmer wants to be playing a role when the next milestone is reached in Waghäusel: “Sallycon Valley”. “We are planning a new home for our growing team and want to establish a working environment where people can express their creativity,” says Sally.

Kesseböhmer now sees that its opportunities lie especially in the sustainability that a digital presence offers. For example, the fittings manufacturer is also intending over the course of the year to invite and train the people from customer organisations and subsidiaries and from sales and business partners who do not have the chance to come to Dahlinghausen. 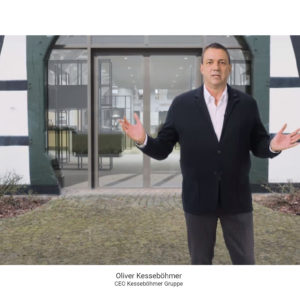 Caption 1: In front of the house, Oliver Kesseböhmer welcomed the guests with a personal address. Photo: Kesseböhmer 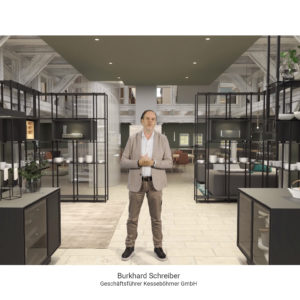 Caption 2: At the exhibition, Burkhard Schreiber gave an overview of the new products, also pointing out the "tRACK" furniture system, which structures the rooms as an architectural design element. Photo: Kesseböhmer 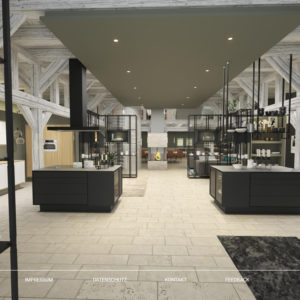 Caption 3: View of the ground floor of the half-timbered house. Photo: Kesseböhmer 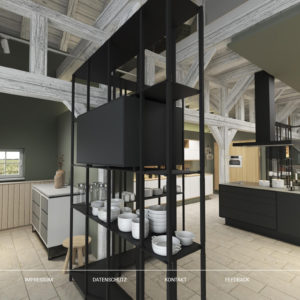 Caption 4: The entrance area of the half-timbered house. Photo: Kesseböhmer 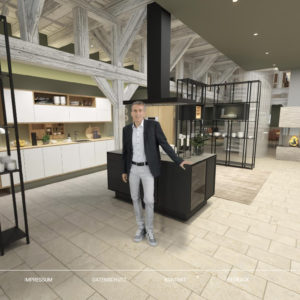 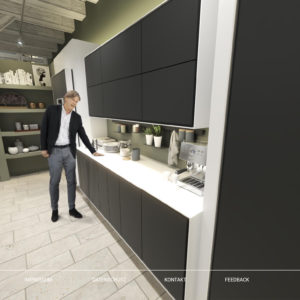 Caption 6: In the entry-level segment, Kesseböhmer provided arguments for its new programme with "K-Line", which serves the demand for quality and functionality in price-sensitive markets. The simple and flat design language also results in a functional and modular complete programme for the utility room. Heiner Klingelhöfer, Area Sales Manager UK & Scandinavia, introduced this topic. Photo: Kesseböhmer 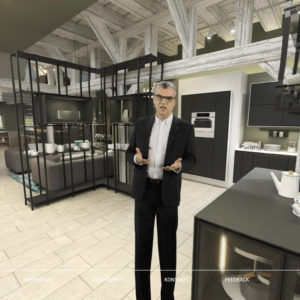 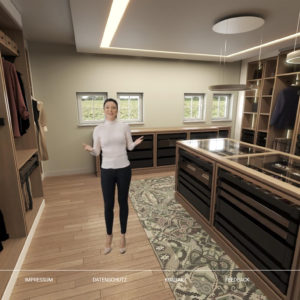 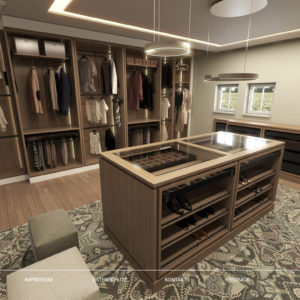 Caption 9: With "Conero", Kesseböhmer has developed a comprehensive range of fittings for the private dressing area. With a clothes lift including a shelf, the company also presented a world first, according to its own information. Photo: Kesseböhmer 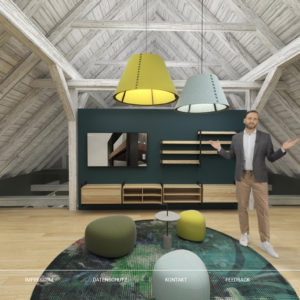 Caption 10: With "K2Build", Kesseböhmer developed a complete set that is like a ready-baked mix for an individual planning situation for the "YouK" ladder shelf. "YouK" lays the foundation so that modern and functional industrial style can move into all living areas. Manuel Pietras, Brand Scout, presented the theme on the first floor of the half-timbered house. Photo: Kesseböhmer 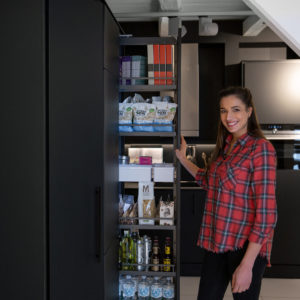 Caption 11: Burkhard Schreiber announced the cooperation with Saliha Özcan alias Sally from "Sally's World" as a new "friend of the house" at the fair. As one of the most successful bloggers for food and baking topics, the former primary school teacher reaches over 12 million people every month on the various online channels. Here in action at the "Dispensa" pharmacy pull-out in the "Urban smart kitchen". Photo: Kesseböhmer
« zurück zur Übersicht