From 12 to 16 April 2021, seven supplier companies will bundle their innovations for the door at a digital trade fair. As a member of the organising T6* Group, BaSys will present innovations in hinge and striking plate systems. These are traditionally presented by the building hardware specialist every two years at BAU. After the trade fair in January 2021 was cancelled as a presence event, the company will for the first time create a compact platform together with other industry players as a contact point for door and frame manufacturers, joiners, carpenters and architects.

One innovation is the multi-award-winning concealed hinge „Pivota DX Close“, which closes doors softly and self-acting. BaSys has completely reworked the closing mechanism for version 2.0. This extends the adjustment options for closing speed and damping. In addition, the new solution is scalable to higher door weights.

With the „Pivota DX 35 3-D LT“, BaSys is continuing its efforts to also be able to offer cost-effective entry-level models in the area of concealed hinges for flush doors. Compared to the slimmed-down „2-D LT“ hinge presented in 2019, the new hinge can be adjusted three-dimensionally. It also already features the higher opening dimension between the two hinge bodies introduced last year to make it easier to install and more stable.

BaSys developed a third significant innovation for the „Combica“ product family. The „STV Inclino“ hinge receiver now also enables 3-D adjustment in the area of lighter hinge systems for light interior doors. For this purpose, the hinge – as the name suggests – is inclined within the hinge receiver. BaSys has completely rethought the topic for this innovation and is presenting the technology, which incidentally works with standard hinges independent of manufacturers, in detail at the digital trade fair, along with other innovations.

Registration for the trade fair will be possible from the end of February under the link www.t6-digital-expo.de. The „T6“ companies worked closely with Enra, a start-up from Paderborn that specialises in digitalisation in B2B sales and marketing, for the digital trade fair presence. BaSys was able to use its experience from last year when the company set up its first digital trade fair due to the cancellation of the Fensterbau Frontale in Nuremberg.

*Under the umbrella brand „T6“, six German and one Swiss manufacturer of locks, fittings and building systems cooperate to offer architects, contractors, processors and dealers worldwide a high-quality and individual portfolio of accessory products for the door that meets the „made in Germany“ or „Swiss made“ standard. All partners convince with performance from family-run, medium-sized traditional companies. In addition to Basys, Deni/Ogro, Velbert, Edi, Iserlohn, Kontex Bausysteme, Blomberg, Planet/Assa Abloy, Switzerland, SAG – Schulte-Schlagbaum, Velbert, and Wilka Schließtechnik, Velbert, belong to the T6 Group. More information at www.germanswisshardware.com. 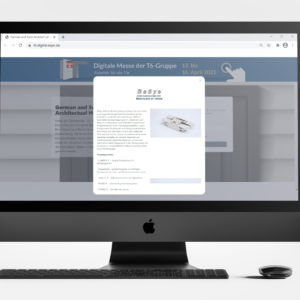 Caption: From 12 to 16 April 2021, seven supplier companies will bundle their innovations for the door at a digital trade fair. As a member of the organising T6 Group, BaSys will present innovations in hinge and striking plate systems. Screenshot: BaSys
« zurück zur Übersicht