Taking place every two years, BAU, the leading trade fair for architecture, materials and systems sets the pace for innovations from building fittings manufacturer Basys – Bartels Systembeschläge from Kalletal. In Munich, 2017 the company will present the „Pivota DX Close“, a concealed hinge that closes doors gently and automatically. The closing mechanism is hidden from view; the range of functions characteristic of concealed hinges is retained in full.

The sturdy basic structure forming the platform for these concealed hinges from Basys provided the foundation for integrating a closing mechanism as well. Featured as standard, a symmetric four-knuckle joint evenly transfers the forces from the door leaf into the frame. It is connected to the hinge elements by pistons which support the hinge transversally.

The „Pivota DX Close“ is additionally fitted with a steel joint and interconnected lock barrel that disappears into the door mortise in the same way as the hinge. This leaves the system to work entirely hidden from view when the door automatically closes. The lock barrel pulls on the joint in a controlled action. For greater safety and an added feel of luxury, the mechanism – which manages without a separate door closer – slows the door down before it gently locks.

The innovation clears up all of the problems that used to be associated with developing this type of hinge. The additional components not only adapt to the concealed system; the hinge also remains fully functional: it can be adjusted in three dimensions and provides an opening angle of 180 degrees.

Developing the new solution, Basys initially places the focus on doors weighing up to 80 kg. Having withstood the required number of test cycles, the product is ready to go into mass production. BAU is to provide a platform for testing customers‘ responses to the new hinge. The next aim will be to verify that it meets the demands on fire protection so as to extend the hinge’s range of applications to cover areas, such as hotels. 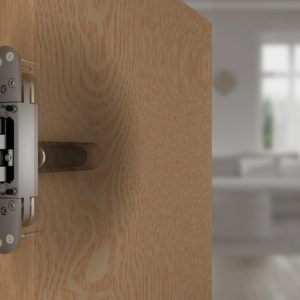