Presenting the „Pivota DX 35 2-D LT“ – „LT“ stands for „light“ – Basys is introducing a cost-effective entry-level model for flush-fitting doors at BAU 2019. Although the concealed hinge has been slimmed down in terms of design, it benefits from all of the features familiar from „Pivota“ hinges, such as low maintenance, transverse support via slide pistons, and the use of solid materials. The new model is capable of supporting 40 kilograms per pair.

Basys itself created the reason for the new development; after extensive endurance tests on four standard-compliant test benches in-house, the company increased the load-bearing capacity of five concealed door hinges by 20 kilograms for many regular customers at the last BAU trade fair in 2017. Among other features, higher quality bearing materials that improve abrasion resistance provided the basis for increasing the load capacity of the „Pivota DX 38 3-D“ and „Pivota DX 42 3-D“ from 40 to 60 kilograms per pair. As a result, many customers – in particular outside of Germany – were denied a cost-effective entry-level model for 40 kg per pair from that point on.

Basys has now filled this gap with the „Pivota DX 35 2-D LT“. A core reason that the quality of this hinge does not suffer, Basys realized the transversely supported piston guide inherent in all of its concealed hinges. The slide pistons distribute the forces arising during opening and closing in all directions. This principle gives the doors a smooth-running mechanism and ensures maintenance-free operation both in terms of supporting door weight as well as smooth opening and closing movement. It reliably takes up door-leaf weights and, together with the solid material used, provides a high level of stability.

In contrast, Basys removed the key cost drivers from the new product. In the „light“ version, two instead of four hinged arms distribute the forces of the door wing evenly into the frame. The hinge can be adjusted vertically and side to side. 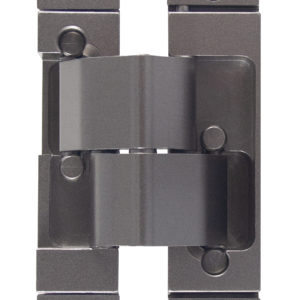