The TOP 100 competition has been held to honour the most innovative small to medium-sized enterprises in Germany for the 25th time. This year, these innovation leaders included BaSys – Bartels Systembeschläge. This was the result of the scientific director of TOP 100, Prof. Dr. Nikolaus Franke. As a mentor of TOP 100, Ranga Yogeshwar presented the company from Kalletal, together with Franke and compamedia with the accolade at the award ceremony in Ludwigsburg on June 29, 2018, held within the framework of the 5th German SME Summit. In the independent selection process, the company, with around 90 employees, impressed the jury in particular with the organisation of its innovative processes.

The strategy of Bartels Systembeschläge GmbH has been firmly established from the very beginning: developing unusual solutions that the door industry does not expect; for example, when a customer needs striker plates that can be installed automatically in his production plant. „This is the niche we use to demarcate ourselves, and to win customers from other suppliers.“ explains Jürgen Bartels, who manages the medium-sized enterprise in Kalletal in East Westphalia together with his brother, Albert.

The „Pivota DX“ range developed in 2001 is one of the flagship solutions of the East Westphalian company: So far, no other producer has a similarly sophisticated range with concealed hinges for flush fitting doors. Time and again the solutions of the TOP 100 company, with almost 90 employees, yield prizes and awards, positioning themselves against the industry giants. The medium-sized company is also well prepared for future challenges: „The trend is towards ever more individualised customer requirements and thus smaller batch sizes,“ states Albert Bartels. The lean and fast production processes required for this are already a part of the Bartels Systembeschläge system setup today.

Since 1993, compamedia has awarded the TOP 100 seal of approval for outstanding innovative strength and above-average innovation success to medium-sized companies. Since 2002, the scientific direction has been in the hands of Prof. Dr. Nikolaus Franke. Franke is founder and director of the Institute for Entrepreneurship and Innovation at the Vienna University of Economics and Business. The mentor of the TOP 100 is the scientific journalist Ranga Yogeshwar. The project partners include the Fraunhofer Society for the Promotion of Applied Research and the BVMW (German Association for Small and Medium-sized Businesses). The manager magazine, impulse and W&V, the specialist magazine for communication and media, support this company competition as media partners. More info at www.top100-germany.com. 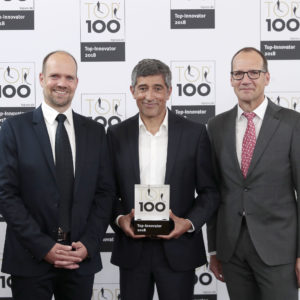 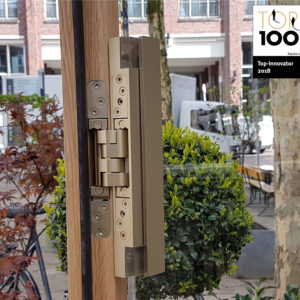 Caption 2: As early as 2001, the company was the first German manufacturer to present a concealed and three-dimensionally adjustable hinge with the "Pivota DX" product range. With the latest development, "Pivota DX Glass", Basys has adapted this proven technology to applications on glass doors – with the associated advantages for scalability and load-bearing capacity, the CE certification as well as their use in standard frames. The components of the object-oriented fitting system are designed to match each other finely and fit flush with the frame and face. BaSys has now received the TOP 100 Innovator 2018 award for the organisation of its innovative processes within the company. Photo: Basys
« zurück zur Übersicht