Wittenberge holds surprises. The town in the Prignitz district, half way between Berlin and Hamburg, is in no way inferior to its namesake, the Lutherian Town of Wittenberg without „e“, either culturally and historically. In 1823, the merchant Salomon Herz initiated the industrial age with the construction of an oil mill, which was considered to be the „most exquisite and largest in the whole of Europe“. And to this day, the charm of the old industrial culture lives on: in a listed adventure hotel whose monumental architecture with its round arch motif shapes the townscape. Chancellor Angela Merkel was a guest here, as was the future Federal President Frank-Walter Steinmeier and many famous athletes and musicians. They too may have noticed the distinctive interior doors. They were equipped with hinges by BaSys.

People would think that it would become boring in Wittenberge very quickly. Here, where history and future unite impressively, the hotel „Alte Ölmühle“ offers a varied program of experience gastronomy and hotel trade, sports and wellness, culture and entertainment. The brick factory buildings on the site directly on the Elbe – two seed vaults, the factory villa, the laboratory, the former suction tower on the bank and the two oil storage octahedrons – hark back to the first Wittenberge industrial plant, which was rebuilt after a large fire in 1856. For the time, a new generation of industrial architecture was used to create the vaults which until then had only been reserved for residential buildings.

According to construction manager Rico Schädler, making it possible for guests to experience the historical charm of the working and everyday culture from the age of industrialization was the declared goal, which he implemented with the intricate craftsmanship characteristic of the interior of industrial buildings. Thus the rooms are furnished with discretely rusted table tops made of natural stone, natural wooden beams, ship lights with protective grilles, telephones resembling the W48 desktop telephone model, and black Bakelite sockets and rotary switches on the walls. The designer left nothing to chance. Even when selecting the representative doors, Schädler also requested various samples; but only one product appeared authentic in the ensemble of the hotel.

Design and function in every detail

„Satin Walnut“ – this door design dominates the interior of the old storage vaults and ensures a pleasant hotel ambience. The walnut takes on the theme of the former industrial plant, because valuable oil was also extracted from walnuts here, especially in the GDR era. The lively veneer pattern with its striking horizontal and contrasting grain perfectly matches the preserved vault walls and beams. And no two doors are alike – each one is unique.

Ahaus, the construction management company responsible for the „Alte Ölmühle“ renovation, found an expert partner in the door manufacturer Herholz, who provided a high quality complete solution including door leaf, frame, hinge, attachment, integrated door lock and electronic hotel terminal for the hotel doors – as a tested unit with regard to fire, smoke and sound insulation.

As a part of this door orchestra, BaSys heavy-duty hinges and striking plates play a role as small but highly effective functional details. They are particularly well suited for the historic industrial architecture of the hotel, because they satisfy the demands on the design, the high frequency of opening and closing, the heavy door weights and the safety and comfort requirements already mentioned.

The high-quality bearing system in which flange bushings with enlarged sliding surfaces are embedded in a special plastic for minimum friction ensures the maintenance-free continuous function of the „Objecta“ system, as the hinges installed are named. A fixing pin featured in all „Objecta“ door hinges distinguishes the product from the usual standard.

The use of the eye-catching visible barrel hinges with a brushed stainless steel finish in the „Alte Ölmühle“ is intentional. They add a technical appearance to the doors. The barrel shafts of the „Objecta“ door hinges are also an eye-catcher with an additional safety aspect: the product does not require the usual cap screws – this ensures greater safety and a more attractive appearance.

The most commonly used hinge length in Wittenberge of 160 mm for load capacities of up to 200 kg, and in the reinforced version (4 mm material thickness, 22 mm barrel diameter) with a load capacity of up to 350 kg per pair, ensure that the very wide, sweeping doors that continue the monumental industrial architecture into the interior of the storage building function with technology appropriate to their weight.

All „Objecta“ door hinges used in the hotel come together with 3D hinge retainers that have been designed to perfectly match the hinges. These adapt the frame construction; with these, the doors can be adjusted very easily in height, depth and side play without the need to remove the door.

126 beds in single and double rooms as well as apartments and one suite are hidden behind the doors to the rooms, which, thanks to the door-leaf seals integrated into the BaSys door hinge systems, are sound-proof and ensure undisturbed sleep. As with all other heavy-duty hinges used in the „Alte Ölmühle“ they support the effective realisation of the fire protection safety concept in the hotel.

Just as Wittenberge developed into a major European industrial centre in the 19th century, the people local to the region are today driving the development of the town into a location attractive to tourists, without forgetting their roots – after all, as the major shareholder of the railway companies, Salomon Herz laid the foundation for Wittenberge’s connection to the railway lines Berlin-Hamburg and – among other things through the construction of the Elbbrücke bridge – Wittenberge-Magdeburg.

The „historical industrial culture with a showcase effect for the entire Prignitz district“ developed rationally with „perseverance, entrepreneurial vision and persistence“ by the owner of the „Alte Ölmühle“, the Genesis GmbH, won the company the Brandenburg State Tourism Prize in 2017 – along with other awards for the implementation of the monument protection and the marketing concept incentive to pursue the set goals further. A spa and wellness area is still to be built this year on a total of 2,300 square meters in the attic of the two seed vaults this year, enabling panoramic views of the sprawling Elbe wetlands and the old town of Wittenberge. This will include additional hotel rooms and apartments, where the interior design concept with its striking doors is to be continued down to the last detail. 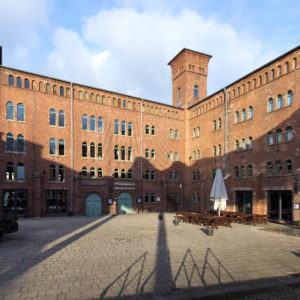 Caption 1: The "Alte Ölmühle" experience hotel with its monumental architecture characterizes the townscape of Wittenberge. Striking interior doors help to keep the historic charm of the industrial listed monument alive inside. They are equipped with hinges by BaSys. Photo: studio-khf.de 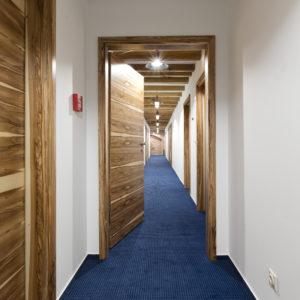 Caption 2: "Satin Walnut" - this door design dominates the interior of the old storage vaults of the oil mill and ensures a pleasant hotel ambience. The walnut takes on the theme of the former industrial plant. The lively veneer pattern with its horizontal and contrasting grain is striking. No two doors are alike – each one is unique. Photo: studio-khf.de 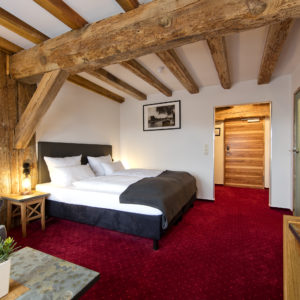 Caption 3: 126 beds in single and double rooms as well as apartments and one suite are hidden behind the doors to the rooms, which, thanks to the door-leaf seals integrated into the BaSys door hinge systems, are sound-proof and ensure undisturbed sleep. The discretely rusted table tops made of natural stone, natural wooden beams, ship lights with protective grilles, and black Bakelite sockets and rotary switches on the walls are a part of the detailed craftsmanship characteristic of industrial buildings. Photo: studio-khf.de 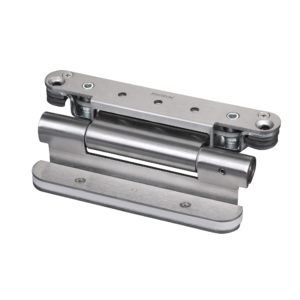 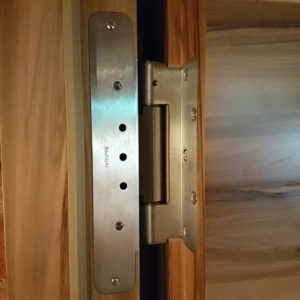 Caption 5: Designed for high load-bearing capacities: The "Objecta 2539/160/48-4" with "STV 70/48 3-D" hinge retainers ensure that the very wide and heavy doors in the hotel "Alte Ölmühle" in Wittenberge function seamlessly. The fixing pin which is used in all "Objecta" hinges is clear to see here. Photo: BaSys 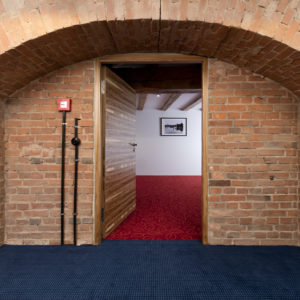 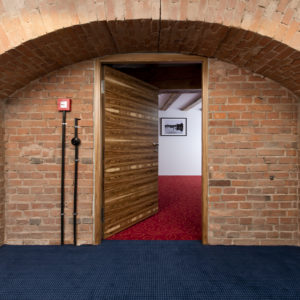 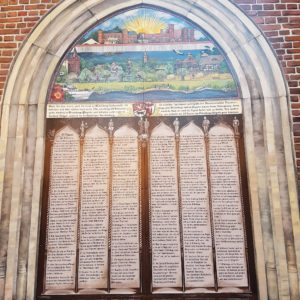 Caption 7: Wittenberge is in no way inferior to its namesake, the Lutherian Town of Wittenberg without "e", either culturally and historically. A single Thesis Door in the hotel "Alte Ölmühle" highlights the attractiveness of the location. Investors and builders, architects and construction management have also immortalized themselves in the photograph. Photo: BaSys