The students of the Karlsruhe University of Music describe their multimedia complex, „MUT“ for short, as a „musical-technical synthesis of the arts“. It is bold in its architecture, and it meets the highest standards. The modern, purist rectangular structure was built in the immediate vicinity of the tradition-rich Gottesaue renaissance castle in 2013. Both buildings form the „OneCampus“, the centre of the university, which is responsible for preparing its students for artistic careers, for a diverse musical and cultural life. The „MUT“ combines a love of detail with its occupants. The design and function of the doors used find their perfection in hinges and striker plates from BaSys.

The Karlsruhe University of Music is committed to the great European music tradition. Promoting high performance here is one of the core areas of education. The university is open to innovations. Future-oriented thinking and the collaboration with new music as a creative expression of our time characterise the profile.

The new multimedia complex is considered by students, professors and lecturers to be an expression of the dynamic future of their university. It facilitates the very latest ideas in education. The building, designed by Rüdenauer-Architektur, Stuttgart, houses the institutes for music informatics, music journalism and music theatre. A large, highly versatile hall with a stage tower equipped to an exceptionally technical level and an orchestra pit forms the centrepiece. Alongside this, the foyer leads to the offices, rehearsal rooms and classrooms, as well as to a glass radio studio.

Design and function-oriented opening and closing

If on the one hand, the focus is on learning and making music together, and on the individual artistic development of each individual, then on the other hand, each architectural detail plays a special role in the concert of the new building complex. This is demonstrated, among other things, by the heavy-duty doors used in the Karlsruhe University and supplied by the company Herholz, Ahaus. The doors, weighing up to 200 kg, demonstrate in the „MUT“ how design and function can interplay perfectly. Not only do they fulfil all the requirements for modern escape, fire and soundproof doors, they also have an aesthetically flexible appearance: on the outside they feature a modern, dark grey surface, while in the inside, facing the hall, a warm wood tone is used.

The concealed BaSys „Pivota DX 180 3D“ hinge supports the doors in their design and in their multifunctional application. The doubly-thick material on the frame side of the hinge is ideal for these doors: the hinge can spring back both in the door leaf and in the frame by up to 8 mm, meaning that the door leaf and wall merge flush together. This small detail helps to continue the idea of purism within the building interior. The unobtrusive, velour-nickel-plated finish of the hinge harmonises with the other stainless steel components.

The „Pivota DX 180 3D“ can be adjusted in three dimensions. Its four-knuckle joint ensures that there is no twisting or tilting, even under high loads of up to 200 kilograms. Using solid materials such as steel and aluminium creates a sturdy joint construction – even after long periods of use, the door leaves do not start to catch. The hinge-class 15 CE certificate assures the long-term, maintenance-free operation, both in terms of supporting the door weight as well as the smooth opening and closing movement.

The „180 3D“ belongs to the DX range of the „Pivota“ hinge family. The heart of the hinge series ideal for flush-fitting doors is the design principle exclusively developed and patented by BaSys, in which the four pistons support the joint transversally. They distribute the forces arising circularly in every direction: from the piston to the hinge body and vice versa. This principle ensures the highest levels of stability, even under extreme loads of up to 350 kilograms. The series provides door and frame manufacturers, contract furnishers and architects with a convenient solution for installation, use and function for all fields of applications.

For the visible elements on the lock side of the doors, the designers used the 3 mm thick tongue striker plates from BaSys. The fittings, produced specially in accordance with customer specifications, are made of solid stainless steel as standard, with a matt brushed finish on the surface for a high-quality appearance. The material has a positive effect on closing performance and gives the striker plate the durability needed to withstand permanent contact with the latch as the door closes.

With its „Stabilo“ striker-plate system, BaSys lays claim to being the German market leader. With just one milling, the fully automatable system covers all requirements and special functions, thus relieving both the door and frame manufacturer.

One of the guiding principles of the Karlsruhe University of Music is „Our commitment today decides how our culture will be tomorrow“. It places focus on the high and long-lasting quality of the young upcoming artists. With the state-of-the-art multimedia complex building serving educational needs, the state of Baden-Württemberg not only built on a solid, developing foundation, but also invested sustainably in the cultural future of the country, and with knowledge of the importance of details that achieve peak performances on a small scale. 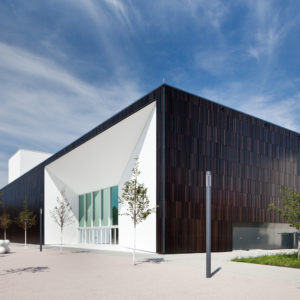 Caption 1: The multimedia complex of the Karlsruhe University of Music was built in the immediate vicinity of the tradition-rich Gottesaue renaissance castle in 2013. The building, designed by Rüdenauer-Architektur, Stuttgart, houses the institutes for music informatics, music journalism and music theatre. Photo: Daniel Vieser Architekturfotografie, Karlsruhe, www.dv-a.de 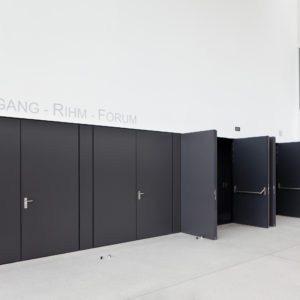 Caption 2: The fact that the door leaf and wall merge flush together is thanks to the BaSys "Pivota DX 180 3D" concealed hinge. Photo: Daniel Vieser Architekturfotografie, Karlsruhe, www.dv-a.de 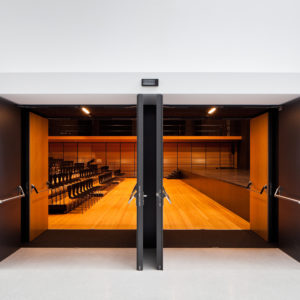 Caption 3: The heavy-duty doors by Herholz installed in the Karlsruhe multimedia complex and weighing up to 200 kilograms each, not only fulfil all the requirements for modern escape, fire and soundproof doors, they are also aesthetically flexible, thanks to the two surface finish options. The concealed BaSys "Pivota DX 180 3D" hinge supports the doors in their design and in their multifunctional application. Photo: Daniel Vieser Architekturfotografie, Karlsruhe, www.dv-a.de 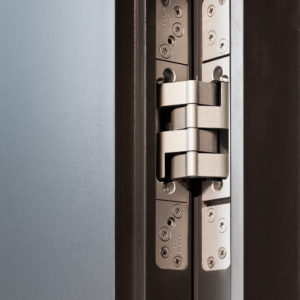 Caption 4: The heart of the BaSys "Pivota DX 180 3D" door hinge: four pistons support the joint and distribute the forces arising in every direction. The principle ensures the highest levels of stability, even under extreme loads. Photo: Daniel Vieser Architekturfotografie, Karlsruhe, www.dv-a.de