After its second appearance at a digital trade fair, BaSys – Bartels Systembeschläge, Kalletal/Germany, is very satisfied. In association with six other companies, the building hardware manufacturer had organised its own digital T6* Expo in mid-April 2021 instead of the cancelled presence trade fairs in Nuremberg and Munich, where visitors could find the latest accessories for doors in a bundle for the first time. BaSys presented its innovations in hinge systems.

A highlight was the new hinge receiver „STV Inclino“, which now also allows 3-D adjustment in the area of lightweight hinge systems for flat doors. For the first time, the hinge is tilted within the hinge holder to adjust the lateral rebate air. With the „Pivota DX 35 3-D LT“, BaSys also offers the current and three-dimensionally adjustable version of a cost-effective entry-level model in the area of concealed hinges for flush-closing doors.

Further BaSys has optimised the models of the very narrow concealed hinges for non-rebated doors and for doors with reveal rebates. The „Pivota DX 78 3-D“ now replaces the „Pivota DX 58“. The housing of the new hinge is much flatter. The reduced milling depth has a positive effect on the appearance of the door. Last but not least, the company presented a new variant with connectors for the concealed cable transition „Pivota Connect“ at the trade fair.

The first digital T6 Expo generated a high level of group dynamics. Whereas at a trade fair with a presence visitors might have to put up with long distances between the exhibitors in different halls, from 12 to 16 April 2021 they were offered all the innovations in door accessories compactly on one platform. The supporting programme turned out to be an attractive attraction. As keynote speakers, experts imparted the latest industry and product knowledge. An average of 130 to 150 guests attended the eleven live lectures.

The long time visitors spent at the stands, between seven and 25 minutes, was also evidence of the high level of interest in the exhibitors‘ topics. Michael Hassel, buyer at Bod’or KTM Manufaktur, Bocholt, contacted BaSys during a live presentation on Friday: „I’m there live and have already been able to see your and the other T6 stands for myself. Once again, great respect for your performance, especially your video presentation makes the information very accessible. Your cable transition would also be something for us, I find the plug solution very nice (and ‚clean‘).“

Mathias Haller, Purchasing Manager at Koch Türen, Austria, wrote to BaSys afterwards: „It was really a successful presentation with the videos. The development of the ‚DX 35‘ was interesting. We should talk about that.“ Klaus Schick, R&D Manager at Köhnlein, Feuchtwangen, thanked BaSys for the invitation to the digital trade fair and for the presentation: „I saw your contributions at your stand. They are great contributions and very clearly presented.“ Schick was particularly interested in the „Pivota DX 35 3-D LT“ and would like to test the „DX 78 3-D“ with its lower milling depth.

Jürgen Bartels also drew a positive conclusion as an exhibitor. In a report on WDR local television on 27 April 2021, the managing owner of BaSys sums up why the company at least uses digital trade fairs to show its innovations: „The advantage is that the visitor also registers here. Based on the data, I can see who has looked at which product. Afterwards, I can pick up the customer specifically and ask what I can do for him with regard to a certain product.“

And although Jürgen Bartels would like to be able to greet customers in person at a real stand again soon, he believes that digital trade fairs will continue to gain in importance in the future, especially for the export market. They would also offer added value when presence events take place again. Innovations could be presented in a more diverse way and would then also be accessible to interested parties who could not be present on site due to high costs or travel restrictions.

For example, he himself was able to offer a potential customer from Saudi Arabia a tour of the company via the video chat during the T6 Expo. Nabil M Al Oudah, Marketing Manager UBM – Universal Building Materials Merchants Co. LTD, thanked him promptly: „Thank you for the kind words, I was overwhelmed with the whole experience and I will see, in coordination with you, to pass the same to our team.“

*Under the umbrella brand „T6“, six German and one Swiss manufacturer of locks, fittings and building systems cooperate to offer architects, contractors, fabricators and dealers worldwide a high-quality and individual portfolio of accessory products for the door that meets the claim of being „made in Germany“ or „Swiss made“. All partners convince with performance from family-run, medium-sized traditional companies. In addition to Basys, the T6 Group includes 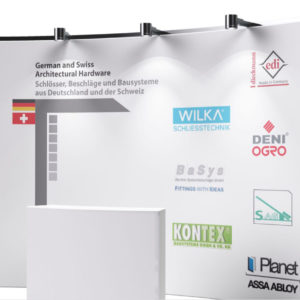 Caption 1: BaSys is very satisfied after its second appearance at a digital trade fair. Together with six other companies, the building hardware manufacturer organised its own digital T6* expo in mid-April 2021, where visitors were able to find the latest accessories for doors in one place for the first time. Photo: BaSys 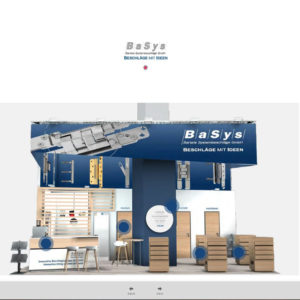 Caption 2: BaSys presented its innovations in hinge systems at the first T6 Expo. One of the highlights was the new hinge receiver "STV Inclino". With the "Pivota DX 35 3-D LT", BaSys also offers the current and 3d-adjustable version of a cost-effective entry-level model. Further BaSys has optimised the model of the very narrow concealed hinges for flush-closing doors and for doors with reveal rebates. In addition, the company presented a new variant for its concealed cable transition at the trade fair. Photo: BaSys 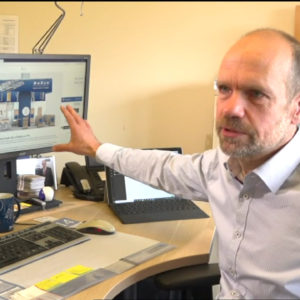 Caption 3: As an exhibitor, Jürgen Bartels drew a positive conclusion after the T6 Expo. In a feature on WDR local television on 27 April 2021, he sums up why the company at least uses digital trade fairs to show its innovations in times of pandemic. Photo: BaSys